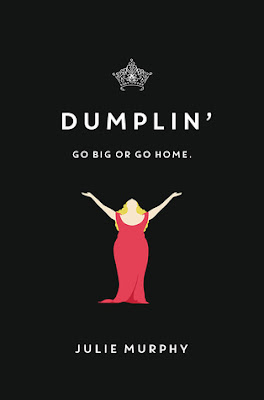 Willowdean Dickson has come to terms with being fatter than her peers...some of the time. It's not always easy with a thin and beautiful best friend and a former pageant queen mom who still works for the pageant each year. Will goes to work, goes to school, and just tries to live the normal life of a teenager. When a handsome co-worker at her job starts to take interest in her, Will's feeling of insecurity come out full force. Does he really like her? If he does, why are they keeping their relationship a secret from everyone else? In a moment of temporary insanity, she decides to enter the Miss Teen Blue Bonnet beauty pageant and prove to herself and everyone that she is just as capable and deserving of wearing a swimsuit, showing off a talent, and being seen and admired by everyone in her small Texas town.

Willowdean is a gem of a character. She is beautifully realistic. She makes dumb choices. She makes smart choices. She apologizes for her mistakes. She is hilarious. She is unsure about herself. While there is a romance in this story, the great thing is that Willowdean is not defined by her relationships. Having a crush or making a new friend or even seeing things differently than her mother does not change who she is.

I sometimes look through some other people's reviews after I have finished a book to see if they loved or hated a book as much as I did. I was rather shocked to see a lot of readers railing against this book because Willowdean can be just as unkind to other kids as they are to her. As the book progresses, she gains some new friends in other girls who don't fit into the narrow box of "thin, gorgeous, straight, and able-bodied." And yes, at first, she is dismissive or mean in her head to those same girls. But I think we all do that. Even if Julie Murphy wrote Willowdean as "body-positive," it's not something that is perfect or consistent. She thinks that her body is great, except when she doubts it. She snickers at the perceived flaws of other students, but the point is that she does eventually befriend them. Being "body-positive" doesn't mean we don't notice what makes people different from us. It's that we don't let it define them or our relationships with them.

Dumplin' is a fantastic book. It's as funny and self-assured as Willowdean herself proves to be. This story reminds us that we are not what others think of us, whether we are teenagers or adults. In a world of seemingly endless cruelty, we need books like this to remind us to be kind to each other. It turns out we aren't as different as we might think.


Dumplin'
By Julie Murphy
384 pages
Balzer + Bray September 2015
From the library
Posted by Lindsey at 6:00 AM