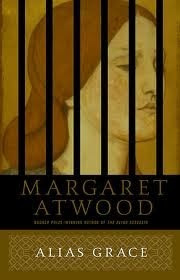 In July of 1843, Thomas Kinnear and his housekeeper Nancy were brutally murdered. Two of Kinnear's servants, Grace Marks and James McDermott, were apprehended fleeing through the United States. Grace insisted that she had no memory of the day of the murder and went with McDermott because she feared for her own life. The press and the prosecution in the murder trial insisted she was complicit in the whole thing. In Alias Grace, Margaret Atwood imagines what might have really happened with Grace Marks and one of the most notorious murder cases in Canadian history.

Alias Grace is a novel that requires the reader to commit. Atwood leaves no stone unturned, as she imagines what her protagonist may or may not have done. A lot of the novel is concerned with the small moments of one woman's life, as she grows up, tries to care for her family, and learns her place as a servant in a rich household. Grace is a woman without agency; a woman whose life is controlled by her father, her boss, her jailers, the judge who presides over her case, and then by Doctor Jordan, a man who tries to discover if she is crazy or criminal. This book seems like an amalgamation of so many genres: it's a mystery, historical fiction, and an examination of what has changed and what remains the same when it comes to our expectations for women. Like all of Atwood's books that I have read, I'm sure that there are layers and layers to uncover for the book lover who embarks on a re-read. 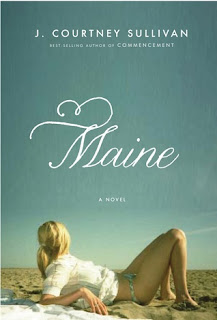 Maine is both a place of beauty and wonder and a place that is taken for granted by the Kelleher family. Ever since patriarch Daniel won a plot of land on the beach, the family has descended each summer to swim, lie on the sand, enjoy each other's company, and drive their relatives crazy. This year, things will be a little different. Grandmother Alice is a bit lost after the death of her husband and considering what should happen to the summer house when she's gone. Her daughter-in-law Ann Marie is coming to look after Alice due to a misplaced sense of duty. She would much rather dream about winning first place in an upcoming dollhouse competition or finally having a romantic moment with her neighbor. Granddaughter Maggie is pregnant, but she hasn't told anyone yet (including her own mother).

Sullivan excels at showing women in very different stages in their lives: Maggie is a bit reckless because she hasn't yet experienced consequences. Ann Marie bends over backwards to please the others in her life, neglecting her own happiness in the process. Alice has had decades of hiding her pain behind appearances, doing good deeds, and a good drink or five. She is finally at the point of not caring anymore what her children, grandchildren, or anyone else thinks of her.

I've seen several readers say that they were deceived by the cover and expected a fun, light beach read. Maine is certainly not that book. The anger has been simmering for years in the Kelleher household and each of the women do some really mean or stupid things during this story. This is not the book for you if you hope that everyone makes the logical choice or that every character will be likable. But our understanding of each woman builds as the author effortlessly dips into each woman's perspective of their past and their present and this story will certainly make you think about (or be thankful for) your own family.

Maine
By J. Courtney Sullivan
Knopf June 2011
388 pages
From my shelves
Posted by Lindsey at 7:39 AM