Review: All of Us and Everything 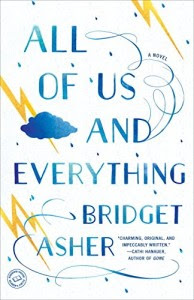 The Rockwell Family has never been what you might call peaceful. Augusta has always told her daughters that their father was absent because he was a spy. The girls deal with their absent father in different ways: Esme tried to create the traditional family she never experienced, Liv flits from husband to husband, and Ru wrote their family story into a novel for everyone to read and then fled the country. When Hurricane Sandy batters their home, the family comes back together to see if their home is salvageable. While the storm destroyed, it also brought long-buried family secrets to life. The discoveries they make will either bring them back together or break them apart forever.

I chose to read this particular book at least in part because the story revolved around Hurricane Sandy. I live in New Jersey and remember being without power after the storm for several days. A tree fell through the living room of the house where we used to live. We took blankets and food and water to drop off points in the community where my husband grew up, because entire blocks of houses were demolished. While I hoped that All of Us and Everything might spend substantial time on the storm and its aftermath, it functions as more of an inciting incident than an ongoing part of the plot.

At times, the characters feel a bit like types. We meet Esme's daughter Atty, who is endlessly sarcastic and always tweeting about what is going on. Middle daughter Liv is both endlessly in search of a new wealthy husband and her next drink.  Jessamine, the devoted housemaid is so neglected by the Rockwells that they completely miss when her husband dies. There were moments when I wanted some more nuance from the characters.

All of Us and Everything is a quirky book. The characters seem like they would be equally at home in a Wes Anderson movie. If you look for some taxidermy and a good old fashioned spy caper along with your family drama, this would be a great pick!


All of Us and Everything
By Bridget Asher
Bantam November 2015
352 pages
From publisher for She Reads Book Club
Posted by Lindsey at 11:15 PM

Email ThisBlogThis!Share to TwitterShare to FacebookShare to Pinterest
Labels: All of Us and Everything, Bridget Asher, She Reads