It's the End of the World As We Know It: Thoughts on Apocalyptic Novels

This post is about apocalyptic novels in general, but there will be specific discussion of Ben H. Winter's Last Policeman series and All We Have Is Now. If you plan to read them, be warned there will be spoilers ahead. 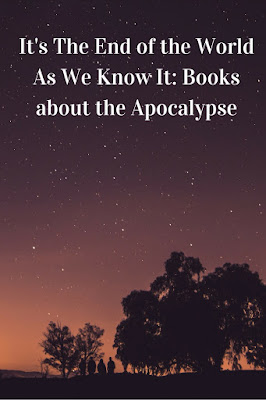 It's the setup of a million movies and a good number of books. An asteroid is heading straight for the earth and it will mean the end of everything. There is often a ragtag group of scientists or engineers (in one memorable case, they worked on an oil rig) who race against the clock to save the planet. In the nick of time, the day is saved and those unexpected heroes are celebrated.

Sometimes the story doesn't go like that. Occasionally we see the days leading up to the end through the eyes of ordinary people who have no role in trying to save humanity. In the YA novel All We Have Is Now, we follow two teens named Emerson and Vince as they decide what to do during those final days. They decide to spend their last day granting people's wishes. In The Last Policeman and the books that follow, our protagonist is Hank Palace. He has just been promoted to detective and he is eager to make his mark. But the news of the impending asteroid means that people stop going to work and society starts to disintegrate around him. In spite of this, Hank is the kind of man who does what is right. When people come to him for help, he does the best he can with what is left. In the final days, he leaves relative comfort to go find his sister and make sure she is safe and knows that she is loved.

I had vastly different reaction to All We Have Is Now and The Last Policeman series. Part of it can certainly be attributed to the different writing styles and the fact that you can cover a great deal more material in three books than you can in one. But the thing that really made me love one and feel "meh" about the other was the ending. In many of these end of the world type stories, there is a fantastic reversal at the end. No one has to die. The crisis is averted, and we are just left with the feeling that perhaps we learned something about the nature of humanity.

But what if an author follows through on that threat? What if the reader and the characters are left watching the sky change and clinging to someone's hand in that final moment? That, my friends, gives the story that came before a much different resonance. The decisions that the characters made had consequences that can't be tidily undone later on, because there is no later on. The picture that Ben H. Winters created of a man we have followed for three books looking to the sky and waiting for the end is one I will not forget any time soon.

So what are your thoughts? Is it cheating when the asteroid never actually hits? Does it lessen the impact (sorry for the pun!) when the author makes a last-minute save? What are your favorite end of the world novels?
Posted by Lindsey at 6:00 AM

Email ThisBlogThis!Share to TwitterShare to FacebookShare to Pinterest
Labels: All We Have Is Now, apocalyptic, Ben H. Winters, Lisa Schroeder, The Last Policeman, World of Trouble