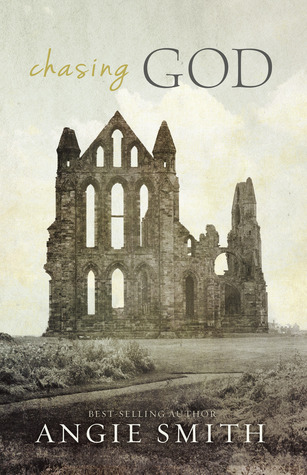 Angie Smith became a Christian as an adult and she was determined to do this thing the right way. She took lots of notes, she bought the big commentaries, and decided that she could be the perfect believer by sheer force of will. But she quickly realized that it was never enough - she was never knowledgeable enough or good enough. She was checking things off from her checklists one by one and chasing after this idea of a God who loved her, but she wasn't getting anywhere. Angie finally realized that she needed to stop running. God didn't need to be caught; he was simply waiting for her to look at Him, standing right next to her.

The Bible tells us pretty clearly that we do not need to do anything. Jesus died for us because He loves us and now we are free to love and be loved by Him. Angie realized that she was looking to reach goals that were man-made. She reached some of them, but there was always a new list of goals to achieve. The problem, of course, was that the goals were not God's goals. Reading a certain number of verses each day or attending every church service for a year will not allow you to know God more if you are not seeking Him.

Angie hits on so many things that make us freeze in place as Christians. She writes about the fallacy of worrying about our salvation, the tendency to mistake emotions for certainty, the ways in which we are always getting ready to know God instead of just starting, and the terrible misunderstanding that God only gives us what we can handle.

“The notion that our Abba Father would dispense injury based on our ability to “carry it” is injurious to our relationship with Him and casts light wrongly on our human capacity instead of His generous dispensation of grace…Do not believe for one moment that the good and bad that happen to you is in equal proportion to how much you can handle without cracking. Because if we could do such a magnificent job of managing things, the sacrifice of Jesus would have been unnecessary.”

I have read all of Angie's books. I started with I Will Carry You, her heartbreaking memoir of losing her daughter and have since read What Women Fear and Mended. This author is at her best when she can be open, kind, and funny all at the same time. She does that here on every page, as she shows us how to know God instead of chasing after our ideas about Him. Chasing God is Smith's best book yet.
Posted by Lindsey at 6:00 AM