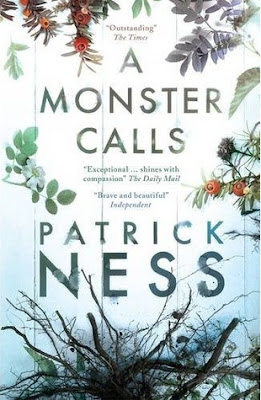 Conor's mother has been sick for a while now. Ever since his classmates started avoiding him, his teachers began pitying him, and his grandmother has been smothering him, he feels incredibly lonely. The only constant in Conor's life is the terrible dream that comes each night. But tonight, the nightmare doesn't end when he wakes up. Instead, a voice calls his name and a monster appears at his bedroom window. The monster promises he will tell him three stories. When he is finished, Conor will have to tell him the truth.

This story was originally conceived by Siobhan Dowd, who died before she could complete the book. Patrick Ness is a master storyteller and A Monster Calls feels very familiar to his readers all the while paying homage to its original creator.

This was a beautiful story but I think I was ultimately hurt by all the hype. I was warned by many readers that I would need to keep a box of tissues handy. While I did find it sad and wanted so badly to reach into the book and help Conor, I didn't find that I needed those tissues after all.

A Monster Calls is a book I want to push into the hands of anyone who is dealing with darkness or grief. Conor is determined to be strong for his mother. He holds in his rage and his sorrow at his mother being ill and refuses to consider any possibility other than his mother getting better. I loved that the monster in this story was not like a modern day horror movie, where a being kills for seemingly no reason. Instead, the monster here is an ancient creature who bring insight to the people he visits. Little by little, the monster uncovers what Conor is truly thinking and feeling and gives him the freedom to express those things.

A Monster Calls is difficult to read because it rings so true. Patrick Ness has written a beautiful story about love, grief, and loss.

A Monster Calls
By Patrick Ness
Walker September 2012
237 pages
From my shelves
Book #3 for Readers Imbibing Peril
Posted by Lindsey at 6:00 AM