Review: The Edge of Lost 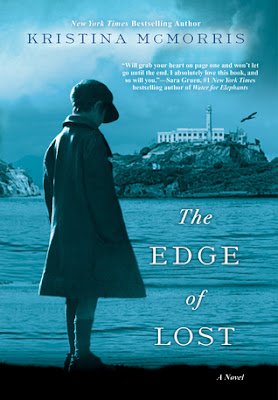 The notorious island prison of Alcatraz has plenty of reasons for the people who work there to be afraid. But perhaps nothing strikes fear into people's heart like a missing child. When the young daughter of a prison guard disappears, all of the employees and their families race to find her. But the only one who knows the truth of what has happened to the girl is Tommy Cappelo, a prisoner serving time for a bank robbery. And he is hoping that Sadie is never found.

The Edge of Lost is set up beautifully. As soon as the reader is good and scared for Sadie, the author throws you back in time to twenty years earlier. We meet a boy named Shanley Egan, who ventures across the ocean from Ireland with his uncle. But something terrible happens and Shan is left to fend for himself in New York City.

While the book is structured around the missing girl at Alcatraz, most of the story is about Shan as a boy and then a young man. We follow him as he tries to find a family in a strange new land, and learn what it means to commit to people even if they aren't your blood relatives. Each character in this story is so interestingly written that you almost wish the narrative wouldn't jump ahead, because it would give you more time with them.

This is the best kind of historical fiction; the story moves effortlessly from Ireland to the Italian neighborhood in Brooklyn, from the prison cells of Alcatraz to swanky secret clubs during prohibition. The reader stays on their toes as situations change and secrets are revealed. But the heart of this book is Shan himself, a boy and then a man who tries to make it through tough times, do the right thing, and protect the people who he loves.

This is my first time reading a book by Kristina McMorris, but it will certainly not be the last!


The Edge of Lost
By Kristina McMorris
Kensington November 2015
340 pages
From publisher for She Reads Book Club
Posted by Lindsey at 4:23 PM

Email ThisBlogThis!Share to TwitterShare to FacebookShare to Pinterest
Labels: Kristina McMorris, She Reads, The Edge of Lost