Review: The Golem and the Jinni 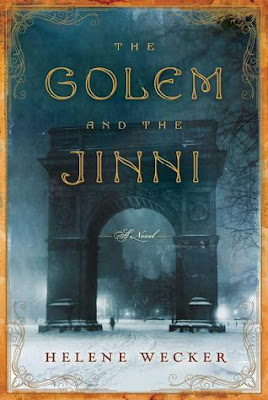 Chava is a golem, created in 1899 by a rabbi who dabbles in old magic. Her new husband takes her across the ocean to America, but doesn't make it through the trip. Chava arrives in New York City, without anywhere to go or anyone to turn to. She is not the only new arrival to the city. A tinsmith receives a flask to repair and inadvertently releases a jinni. Ahmad hides his true identity and begins working alongside Arbeely in his shop. When Chava and Ahmad meet, Jewish and Muslim neighborhoods collide and their relationship will either destroy the golem and jinni or give them a sense of belonging they have never before experienced.

The Golem and the Jinni is part historical fiction and part fantasy. The reader gets to travel the streets of Little Syria as well as live side by side with a rabbi and in a home for recently arrived Jewish immigrants.

While Chava and Ahmad are distinctly unique characters, this story is essentially about being an immigrant, an outsider, someone who doesn't fit in. As the two try to acclimate to their new lives, they search for the things that make someone human. In many ways, they are opposites--Chava is made of clay and struggles to express emotion, while Ahmad is full of fire and ready to woo women or confront enemies. But when they are together, they learn things they never would have grasped on their own.

This was a book that I didn't want to end. I would have been happy to dive deeper into Ahmad's past, or wander the early morning streets with Chava. The good news is that Helene Wecker is continuing their story with a sequel, which will tentatively be published in 2018.

The Golem and the Jinni
By Helene Wecker
Harper April 2013
486 pages
From my shelves
Posted by Lindsey at 12:02 PM

Email ThisBlogThis!Share to TwitterShare to FacebookShare to Pinterest
Labels: Helene Wecker, The Golem and the Jinni