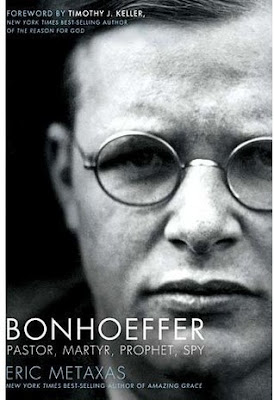 Dietrich Bonhoeffer is a pastor and writer known for important Christian works such as Discipleship and Ethics. He is also one of the people who worked from within Germany to fight the Third Reich and take Hitler out of power, by any means necessary. How did a man of faith reconcile the possibility of murder? What drove this man to risk everything to fight for the Germany he loved?

This book is more than 500 pages long. While it might seem intimidating, the talented Eric Metaxas uses every paragraph to bring Dietrich Bonhoeffer to life and convey the difficult choices that Germans faced during the rise and rule of the Nazis. He starts at the beginning of Bonhoeffer's life and reveals the exact combination that made him into the man he became - a religious mother, a wealthy and educated family, and family members who worked for the government and had inside information.

Bonhoeffer was still coming up through the ranks of seminary and ministry as Hitler rose to power, but he knew from the outset that their new leader could not be trusted and that bad things were on the horizon. He was a man who loved Germany as a nation and was willing to fight for the country he had grown up in. Hitler was aware of the potential for the church to cause trouble, so he tried to control it early on by creating a national church that was controlled by his appointee. Bonhoeffer was appalled by the people who called themselves followers of Christ but would not protest the way that their fellow Germans were being treated by the Third Reich. Along with many other pastors, he split from the national church and formed the Confessing Church.

One of Bonhoeffer's great tasks was making connections with pastors and leaders outside of Germany. There were many Germans who understood the importance of overthrowing Hitler, but they wanted to make sure they would have the support of other nations and that they and their countrymen would not be punished for sins they had not committed. Unfortunately, this met with little success and many men in the government who might have taken great risks didn't, choosing instead to look out for their own safety and security.

Perhaps the most frustrating thing about Bonhoeffer's story is the futility of it all. Dietrich Bonhoeffer was arrested not for plotting against Hitler, but for redirecting some money to help Jewish refugees. He was executed by the Nazis just a few weeks before the end of the war. The fact that he came so close to surviving the war and going on to write new works, marry his fiance, and fight other injustices is heartbreaking.

In Bonhoeffer: Pastor, Martyr, Prophet, Spy, readers receive perhaps the best look at Bonhoeffer they are likely to get outside of his own writing. Mr. Metaxas presents a man who was consistently evolving and learning, but also had the conviction to fight and die for his belief in what was right.