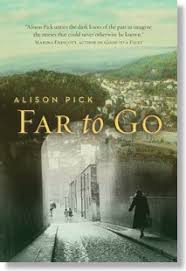 Marta Meuller is the beloved nanny of a little Jewish boy named Pepik. She lives with the Bauer family in Czechoslovakia on the brink of Hitler’s takeover. Pavel Bauer is a wealthy factory owner who believes that the conflict will be over shortly and he will be able to protect Pepik and his wife Anneliese. Marta struggles with her beliefs about the Jewish people and whether to disclose the betrayal of Ernst, her lover and Pavel’s friend. The novel shifts between Marta and the Bauers in 1938 and a present day narrator studying the Kindertransport, the evacuation of Jewish children from the war zone.

This is a very rich, beautiful novel. I have always enjoyed (is that the right word?) writing centered around the WWII era, perhaps because the stakes are so high and the stories so poignant. Far to Go is excellent because the characters are all immensely flawed. In many novels set in this era, both the Jewish characters and the ones who help them seem almost saintly – they are devout and forgiving and kind. However, the members of the Bauer family are cultural Jews who do not practice the religious rites of Judiasm. It's fascinating to see them struggle with their religion - Pavel finds new faith, while Anneliese considers having their son baptized as a Catholic in an effort to save his life.

The most interesting aspect for me was the very brave choice on the part of Ms. Pick to have Marta battle with her feelings about the Bauer family. While she loves the family, especially her young charge, the words “dirty Jew” spring to mind when Anneliese angers her. She considers betraying the Bauers when she feels they have abandoned her.

“Marta loathed them for this with a ferocity she did not understand. It wasn’t that she was jealous because she had nobody to hold her after a quarrel; she had nobody to quarrel with in the first place. What she resented was the Bauers’ softness. She needed them to be strong, to be above mortal failings. Instead they were human, after all.”

This is a very insightful novel about a terrible time in history and about the risks we take to protect ourselves and protect the people we care about. I carried this book around with me, searching out a spare moment to read just a few more pages. The level of danger is very high here for everyone – any moment, the Bauers could be rounded up and taken to a camp. Even Marta is not safe, since she is an orphan and has no evidence of her heritage.

As the present day narrator reflects on the events, we learn what happens to the other characters bit by bit. This is an excellent way to keep the reader frantically turning pages. We also have the added mystery of who this narrator is - we know that there is a link to the Bauers, but not how they are connected. As we learn the terrible fate of some of the minor characters, the nerves of the reader are on edge to find out what happens to the central characters we are growing to love.

Far to Go is a very excellent Holocaust novel.  I really appreciated the complicated, flawed characters and the conclusions made about family, legacy, and the creation of history.