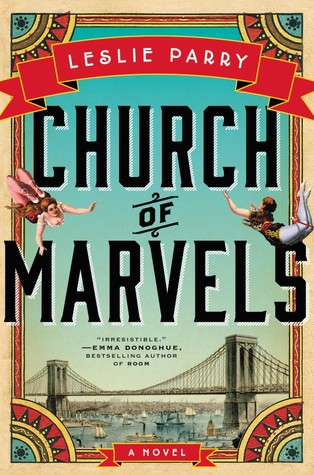 In the last days of the nineteenth century, some of the inhabitants of New York City walk in the light of day and enjoy the extravagance and beauty of life. But others stick to the shadows, determined to survive without drawing any attention to themselves. Sylvan works cleaning the privies under the cover of darkness until he finds a baby abandoned in the muck. He decides he must find where she belongs. On Coney Island, Odile sets out to find her sister Belle after the death of their vaudeville queen mother and the destruction of the circus they called home. Across the river Alphie wakes up in a lunatic's asylum, unsure about how she got there and how or if she can escape. Each of their stories will intertwine in unexpected ways in the darkest corners of New York City.

The title and cover of this book suggest that the reader will be immersed in the sights and sounds of the Big Top. But we only visit the Church of Marvels in Odile's memory. Instead, this story follows the people who do not belong in polite society, the ones who hide around the edges or pretend to be someone else.  Ms. Parry takes us to an opium den where a gang of children scavenge to survive, into the pain and horror of an insane asylum, and behind the curtain of a notorious brothel.

While I enjoyed this book, I thought it fell short in a few ways. I wanted more of the magic of the circus, but instead experienced the darkness and pain of the people that no one wants to see in the city.  If it had been presented as such, I think i would have been a better experience. Expecting one thing and getting another was frustrating. Then Parry waits too long to bring all of her characters and their stories together. When she does, it is terrifically compelling. But it feels like too little, too late.
Church of Marvels is a powerful debut. The places inhabited by these characters may be dark and often distasteful, but Parry brings light to every corner to show readers the pain of those considered "less than" and the lengths they will go to in order to protect themselves and their loved ones. This author has a serious gift for creating a specific place and moment in time that is matched by few authors writing today. I will be watching closely for her next book.
Posted by Lindsey at 7:57 AM