Review: A God In Ruins

A God In Ruins
By Kate Atkinson
Little, Brown, and Company May 2015
468 pages
From the library 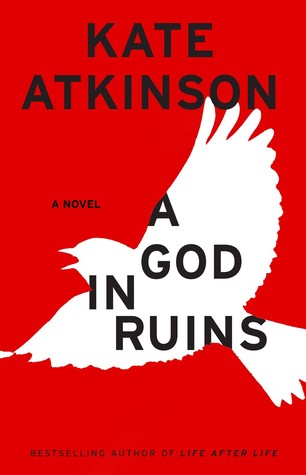 Readers went on a fascinating journey with Ursula Todd in Life After Life. Ursula loved many people, but perhaps her most beloved was her brother Teddy. In A God In Ruins, we follow Teddy through his experiences as a RAF pilot during WWII and into everyday life as a husband, father, and grandfather. Teddy shows us what it is like to live a future you never expected to see and to watch your children and grandchildren make choices you could never fathom.

A God in Ruins is told in alternating (and constantly moving) timelines, as we follow young, brash Teddy's days as a pilot and then the quotidian moments of work, family, and growing older. It could easily be called a war novel, as we follow Teddy on mission after mission. But I think it does this novel and Atkinson a disservice to leave it there. While we certainly see the horror and uncertainty of war, the more striking part for me was what came afterwards. Teddy feels the generational gaps very intensely, as his daughter joins a commune and makes irresponsible decisions that create a potentially unbridgeable gap between Teddy, his daughter, and his grandchildren. The heartbreak that he feels as he sees the lack of understanding and respect that the children have for him is palpable.

Teddy and his wife Nancy are forever distant with each other, as he wants to talk about the experiences of the war that forever changed him while Nancy is unable or unwilling to do the same about her time as a codebreaker. Teddy has never felt more like himself than when he led a group of men inside a tiny metal tube with a single goal giving each of them certainty of purpose. Teddy sees talking about it as a way to pay tribute to that time in his life and to the people who gave their lives during the war. How will anyone remember their lives and the sacrifices made by so many if no one is willing to talk about them?

Interestingly, Teddy sometimes muses over or tells his grandchildren about events that the readers experienced with him firsthand earlier or will see later in the book. And sometimes those events don't play out exactly the same way - no one has a perfect memory, after all. While Life After Life actually took readers through multiple versions of Ursula's life, this story reminds us that we are destined to live the important moments of our lives again and again as we retell our stories and remember our happiest and most heartbreaking experiences.

A God in Ruins is a tale about a family who fails, time after time, to connect with each other in meaningful and long-lasting ways. Atkinson manages to make us care for the most frustrating of characters as we watch the Todd family hurt and miss each other again and again. It is a story about war and memories and family and what it means to live a life that matters. This beautifully written book is a wonderful choice for the reader who is just encountering the Todd family for the first time or the one who adored them in Life After Life and is eager to spend more time with Ursula, Teddy, and the storytelling prowess of Kate Atkinson.
Posted by Lindsey at 10:37 AM

Email ThisBlogThis!Share to TwitterShare to FacebookShare to Pinterest
Labels: A God In Ruins, Kate Atkinson