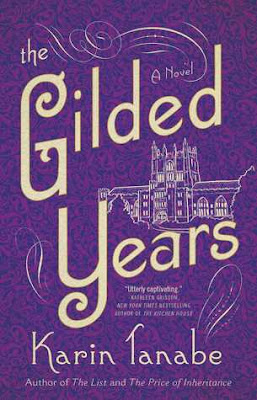 Anita Hemmings has wanted to attend Vassar College ever since she was a little girl. In 1897, she is a senior who is excelling in languages and is well-liked by her classmates. This year, she is rooming with Lottie Taylor, the daughter of one of the wealthiest, most prestigious men in New York. Lottie's insistence on becoming close friends with her roommate puts Anita in a perilous position, because Anita is not the typical Vassar student. She is the only African American student at the school, but no one knows that about her. Anita is passing.

The Gilded Years is based on true events. Anita Hemmings was the first black student to graduate from Vassar College. But little is known about the inner thoughts of Anita or even what happened to her after she left the school. Karin Tanabe has a somewhat blank canvas to imagine what it was like for this young woman to pay attention every moment of every day to ensure that she separated her identity as a white student from the reality of her poor, black family back home.

Tanabe does an excellent job of creating a sense of place and time. I believed that I was in the hallways of Vassar chatting about classes or visiting the grand mansions of New York City with Lottie. But I never really felt a connection with Anita herself. Perhaps it's because Anita spends so much of her life living on the periphery and trying not to be remembered, but she never seemed fully realized as a character or a person.

I'm glad Karin Tanabe wrote this book. It's important that we know the story of Anita Hemmings, that we understand the lengths that people had to go to in order to get an education, a job, or live in a better neighborhood. Anita didn't write her own story but, through this book, we can imagine the life of a woman who fearlessly pursued her dreams.