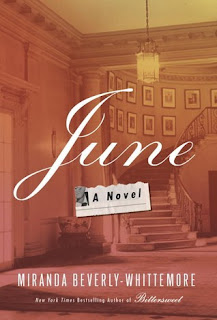 Cassie Danvers is happy to hole up in her grandmother's crumbling mansion while she tries to figure out what to do next. Her grandmother has passed away, Cassie has split with her boyfriend and left New York City, and now she has to decide the next step. But it turns out that her future just may come to her front door, when she is informed that famous movie star Jack Montgomery has left her his fortune. Jack's daughters, who are famous in their own right, are not pleased with this and they descend on Cassie, with their assistants in tow. Cassie and her slightly bizarre guests turn to the past, as they research the summer that Jack Montgomery filmed a movie in the small town of St. Jude, Ohio and met Cassie's grandmother June.

As in her earlier novel Bittersweet, Beverly-Whittemore deftly portrays the ways in which money does (and doesn't) change things for her characters in both the past and the present. Two Oaks, the house in which June and then Cassie live, is an actual character that reacts to the things that happen within its walls and falls apart on purpose to get what it wants.

I found the two timelines somewhat uneven. The author has chosen to give us most of the past story through the eyes of June's best friend Lindie, who is younger, poor, and has a tendency to dress in her father's old clothing instead of the dresses favored by June. Lindie in her own right is a fascinating character and the relationship between the two girls in the midst of Southern gentility and Hollywood glamour makes for great reading. Cassie's story in the present seems to suffer by comparison. She spends a fair amount of the book moping around, trying to decide if she should get out of bed in the morning or not. This doesn't make for very riveting reading and it doesn't particularly endear us to her character.

It's tough to write parallel story lines that equally hold the reader's interest. In spite of this, if you like your summer reads full of forbidden trysts, deep friendships, and long-held family secrets, June is the perfect story for your weekend reading.

June
By Miranda Beverly-Whittemore
Crown May 2016
400 pages
Read via Netgalley
Posted by Lindsey at 9:49 AM