What is going on with November? I feel like it's just an awkward few weeks between October and Advent. There is not much to report from this month. D had lots of days off from school. We celebrated Thanksgiving with a multi-faith community service the Sunday before, and then we had dinner at my parent's church with the family and other families from their congregation.

Now it's onward to a certain little boy's birthday and all of the excitement of Christmas!


What I Read/Reviewed:  I only reviewed five books this month. Yikes. I think I'm reading at about the same pace, but the time (or desire) to sit down and write those reviews is just not happening.

Thanks to Nonfiction November, I read three nonfiction titles and two novels. Two books were for review, one was from the library, and two were from my own bookshelves.

Favorite posts from this month:The little girl and I tried our hands at being music reviewers when we wrote about Laurie Berkner's new album for kids. I had a lot of fun with Nonfiction November, talking about fiction/nonfiction book pairings and my experiences with nonfiction so far this year.

What I'm watching:
The husband and I finished watching Parks and Rec and most of our regular shows are on winter hiatus. We watched Jessica Jones along with everyone else. It was great, but I probably need a comedy chaser after that one!

I don't know what we will end up watching over the tv wasteland of December and January. Perhaps a rewatch of The West Wing or Fringe?

What I've been listening to:
Have you heard the concept album of Sara Bareilles' Waitress? It's wonderful. I hope I will be able to see the show when it comes to Broadway next year.

What I've been cooking and baking:

Oat and Wheat Sandwich Bread (Smitten Kitchen): I've been baking my own bread for the past few months. I like knowing exactly what is in our bread, and my kids eat cream cheese sandwiches like they are going out of style. I recently switched to this recipe and the consensus is that it is a keeper! 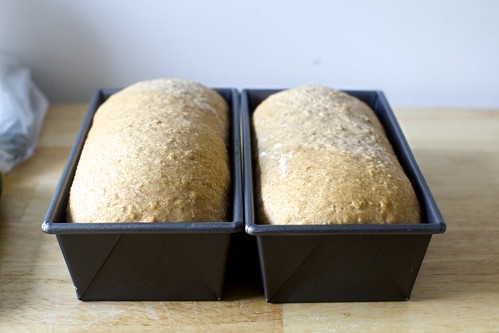 Steak, Spinach, and Mushrooms Crepes (Half Baked Harvest)
So perhaps you and your husband happen to have a weekday off on the same day and, when your toddler sleeps, you make yourself a fancy lunch. This would be that lunch. And yes, it is just as delicious as it looks.

Chicken and Pineapple Quesadillas (Budget Bytes): I know, I know. You have made quesadillas a million times. But I have to tell you guys that you have been missing out - your quesadillas need pineapple. Get to it.

What we love this month:

1) I've mentioned before that the little girl and I have an hour-long commute twice a week. Snacks are a must-have! We are especially fond of applesauce pouches from GoGo Squeez or Charlie and Alice and Nature's Valley Soft Baked Oatmeal bars. A toddler who is no longer hungry is a toddler who is much happier!

2)The other thing that has made the long drives a little easier is the Winnie The Pooh audiobook. The stories themselves are ones I have read to the kids many times, but the narration on this edition is wonderful. You can't get much better than Judi Dench and Stephen Fry as narrators and each character is voiced by a different actor.

Email ThisBlogThis!Share to TwitterShare to FacebookShare to Pinterest
Labels: Monthly Wrapup, What I'm Into